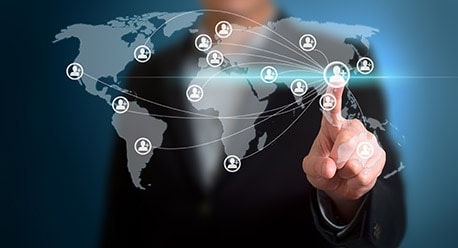 Our client, the Alaska Air Group Inc., owns two certificated airlines operating in the United States: Alaska Airlines and Horizon Air. Alaska Airlines (Alaska) was the first domestic airline to offer in-flight movies, yet has been close to the last of the major carriers to adopt and provide onboard streaming service to its passengers.

Airlines are not typically early adopters of technology, as their investments are much longer-term. Upgrades are expensive and time-consuming. When airlines look for ways to trim weight and fuel costs in order to stay competitive with their rates, there must be a suitable return on investment. In this light, providing passengers with a better flight experience creates a lifelong customer, with many returns.

Therefore, in order to evolve to its new landscape of technology leadership, onboard streaming became a high priority to the airline. 136 aircraft would need the new offering, with approximately 250 titles in the movie and television catalog changed every 60 days.

Kalles Group (KG) consultants were brought in to Alaska’s PMO to manage the upgrade to the onboard streaming service. In order to stay competitive and avoid losing longer flights to other carriers with appealing onboard amenities, the project team had to act quickly to implement the new offering.

KG consultants interfaced with mechanics, engineers, pilots, flight attendants, marketing managers, IT personnel and more. For the technical engineering and maintenance personnel, more in-depth skills and new systems would be required. The crew onboarding effort would require education on how the technology works, and the common challenges devices present to users. Marketing would need to ensure the offering distinguished the airline from others. IT would have a new system to support and understand.

Successful implementation meant that instead of having 10 aircraft ready on the day of launch, Alaska would need 50. This rapid acceleration of workflow required frequent communication, trained and ready staff, and a quick-thinking supply chain. Vendor partners in the initiative were just as involved as employees. Transparency, accountability and steady project leadership were required to keep the pace going.

Process implementation of the streaming IFE (in-flight entertainment) product (Gogo Video Player) involved pairing a new ACPU server in the lower bay of the aircraft with upgraded WAPs (wireless access points) in the cabin. ACPU-2 features were to include advanced processing capabilities, ARINC 429 aircraft interfaces, expanded Gigabit Ethernet ports with Layer 2/3 support, avionic discretes, onboard Wi-Fi radio, GSM Terrestrial modem, and extended onboard multi-Terabyte SSD mass storage capability. The WAPs were upgraded from 802.11b to 802.11n protocol, along with an additional antenna in the center of the cabin.

Removal and installation required the aircraft to be taken out of service for a brief period. Logistically, this affected all aspects of the airline’s planning resources to schedule work around revenue service – a very complex process involving multiple teams.

There were five main locations where aircraft could be serviced by Alaska engineers. Parts were needed in various locations on a precise schedule. Where external partners were used, aircraft were serviced in Oklahoma City, Oklahoma, Greensboro, North Carolina, and Everett, Washington, with some additional locations as needed. Due to the expanse of locations and parts, dedicated materials control and line-planning personnel were involved in daily efforts.

On the backend, a network operation center based in the Chicago area monitored and reported the performance of onboard streaming media and internet services for consumers while in flight. The streaming servers were equipped with 2TB solid state drives (SSDs), on which DRM (Digital Rights Management) encrypted content was stored and streamed over multiple WAPs in the cabin of the aircraft.

In hindsight, it turns out that being near the end of a cycle of industry technology change also allows the major product bugs to be worked out. The quality of the online streaming service offering improved as a result while several other airlines with older systems continue to offer a lower-grade experience.

This project received enormous scrutiny. A common sentiment shared amongst employees related to this project was that it was a game-changer for the airline. On launch day, 54 aircraft were upgraded and ready. In the months that followed, the project team maintained its aggressive pace, and committed to a deadline that
spoke to the original vision of delivering Alaska’s service to its passengers on time, under budget and of the highest quality.